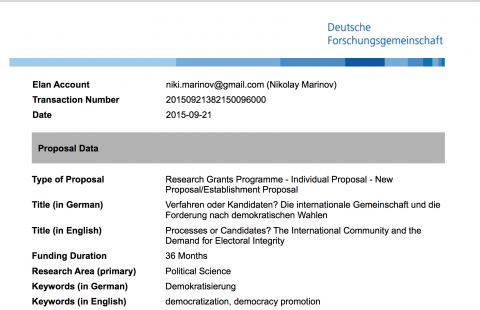 Processes or Candidates? The International Community and the Demand for Electoral Integrity

The project seeks to understand the conditions under which states choose to support the process of free and fair elections beyond their borders. We know that when powerful states support democratic processes, this helps representative institutions become established. We do not know the conditions under which promoting democracy is an optimal strategy for the interveners. This project argues that external interventions in elections take two principal forms: supporting specific candidates or supporting democratic processes. Election-eve statements in favor of a candidate, promises of aid, and even threats of invasion if the wrong party wins, illustrate the first, pro-candidate, type of intervention. Sending election observers, conditioning the flow of benefits to the country on clean elections, are examples of the second, pro-democracy, kind of intervention. Unlike the conventional wisdom - which only sees democracy-promotion, democracy-erosion, or no interest in the elections of others - the point of departure here is that pro-candidate and process interventions are different, independent dimensions of international policy. We also argue that the strategies of other states matter for the choice of policy. Ultimately, the goal of this project is to develop fully hypotheses about elections as proxy wars among regional and global powers, and to test them in an innovative dataset. The work is the first to spell out the conditions under which international interest in elections leads to the strengthening of democratic procedures, as opposed to undermining free and fair competition. Its policy-relevance is significant. The new data will give rise to multiple spin-off projects.

In June of 2016, the proposal was officially approved for funding.