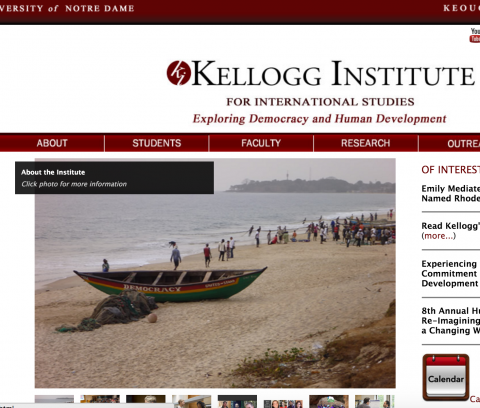 On Dec 18, Paolo Carozzo, Director of the Kellogg Institute for International Studies at the University of Notre Dame wrote:

I am pleased to offer you an appointment as a Visiting Fellow of the Institute. We expect a stimulating and congenial group of fellows and know that you will have much to contribute to our intellectual community. We are confident that you will find the facilities and atmosphere of the Institute and the University conducive to developing your project.

Excerpts from Marinov’s letter of interest, describing the project:

At Kellogg, I plan to complete my book in progress, tentatively titled “Election Wars: How Great Powers Intervene in Democracy”

This book manuscript is part of a larger data project. The project seeks to understand the conditions under which states, and the organizations they empower, offer to support the process of free and fair elections as opposed to throwing their clout behind particular candidates in elections. The broader theme is already receiving significant attention: a recent special issue of Democratization, and several articles in the European Journal of Political Research looked at democracy promotion and the challenges of illiberal regional powers. Placing friendly candidates in office has long been an objective of regional and global powers. The stand-off between Russia, on the one hand, and the EU and the United States, on the other hand, over Ukraine, is an example. Pro-candidate election-eve statements, promises of aid, and even threats of invasion if the wrong party wins, illustrate this type of intervention. We also have, especially as of the last 20-30 years, a counter-tendency of supporting a free and fair political process. The proposed project is the first to lay-out a rigorous conceptual road-map of what is a process, and what is a pro-candidate, intervention in democracy. The argument is that these are different, independent dimensions of international policy rather than simple opposites. This proposed classification upends conventional wisdom, which only sees democracy-promotion, democracy-erosion, or no interest in the elections of others. The project relies on a robust data-coding exercise. A number of research assistants have been generating data on a random sample of 300 elections since 1945, counting and classifying variables that go after instances of division in society on relations with regional, global powers, as well as information on specific interventions by international actors. The pilot dataset is the first to trace the global contours of the two trends, and offer a glimpse of the different interventions over time. The goal is to test hypotheses related to “elections as proxy wars”: the conditions under which international interest leads to the strengthening of democratic process and procedure, as opposed to undermining free and fair competition.